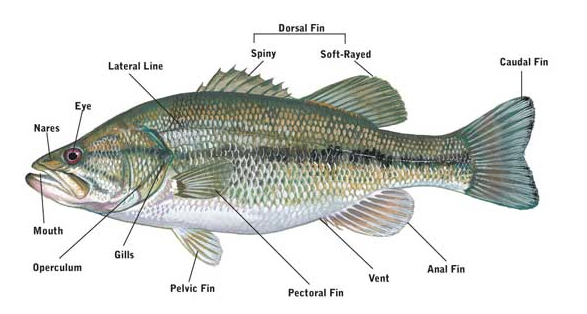 Angler: One who catches fish with hook and line for recreation.

Bag Limit: The total amount of a regulated gamefish permitted to keep per size, day, as listed  per state regulations.

Bait: Artificial lures or live creatures placed on a hook to entice fish to strike.

Barbels: Sensory organs used to help find food. These are found only on certain fish such as catfish and sturgeons.

Catch and Release: The act of releasing a fish immediately after catching it. This is a common practice and many fish are required to be catch and release per state regulations.

Caudal Fin (Tail): The tail of the fish, this fin propels the fish.

Chum: Fish oil mixed with cut up chunks of fish placed into the water used to attract other types of fish.

Dorsal Fin: This fin is located on top of the fish and it assists with balance.

Drop Off: A quick increase in water depth.

Fly Fishing: The act of fishing using a fly rod and an artificial fly as a lure.

Free Spool: the act of allowing the fishing line to to be released without any resistance or drag.

Gills: The respiratory organ that allows fish to extract oxygen from water and then passes the oxygen to their bloodstream and thus lets them breathe.

Keeper: Usually any fish that is deemed worth taking home.

Lateral Line: This line consists of organ receptors called neuromasts which goes from the operculum to the caudal fin. These receptors sense movement and vibrations in the water and helps the fish to locate prey and watch out for predators.

Mouth: Used to take in water for breathing and to consume food.

Nares: These are very similar to traditional nostrils, except that are used only for smelling and not breathing.

Operculum: This bony flap protects the gills and allows water to pass over the gills as it opens and closes.

Pectoral fin: Located on each side of the fish and helps with side to side direction, speed and braking.

Pelvic fin: Located on the bottom front and helps with up and down movement.

Pseudobranch: a minute gill design similar to primordial fish and sharks. It is commonly found on the inside of the gill cover base of bony fish.

Scales: Cover the outside of the fish and are for protection.

Swim Bladder: An internal organ that can inflate and deflate with air to regulate the fish to allow it to float at different levels.