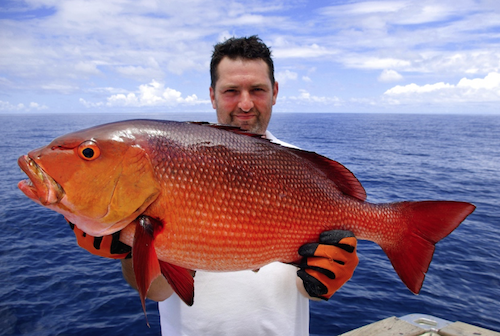 The best way to learn how to catch red snapper is to know their habits and location, and this shouldn’t be too hard given they’re among the most popular game fish in the Gulf of Mexico and the southeastern United States. These fish are bottom dwellers and can be found at a range from 30 feet to nearly 200 feet. So if you’re going to fish for these, you have to go bottom fishing as they’ll be in reefs, wrecks and other deep water structures.

What are the Best Rigs?

There are many types of rigs to choose from, and it’s always a good idea to use braided lines for bottom fishing. The Carolina style bottom rig is especially good, and you can use an egg sinker or 8 to 32 ounces of lead, with the main line connected to a swivel. To keep your knot protected from the weight, you should use a red bead so even if the weight strikes your swivel the knot won’t get damaged, and it won’t slide.

Your leader should be hooked up to the swivel (30 to 60 lbs. will do fine as well as fluorocarbon or mono). What’s important when fishing for red snapper is that your leader is of good length. Red snapper have keen eyesight, and in areas where there’s plenty of water pressure they can be choosy about the baits. For best results you should use a leader that’s 15 to 30 feet, the exact length dependent on the depth of the water and what tackle you’re using.

What are the Best Baits?

Red snapper typically consume fish as well as squid, but they also like crustaceans, small pinfish, pilchard, and other fish. The larger the red snapper you’re after the bigger the baitfish should be. A palm sized pinfish is a good option and if you butterfly this to the bottom, red snapper will go after it because the flapping draws them. Unlike other fish, let them have a second bite as this will make them swim around the bait, making the catch easier.

How to Best Use Jigs to Land Red Snapper

Apart from live bait you can also use jigs to target one of these snappers. Both lead head and vertical jigs should work out fine, and a pain jig will do all right, or you can add a squid or other stuff onto it.
Aside from using the best bait for red snapper, it’s also common practice among anglers to use metal jigs as it never fails to attract them. Luminous jigs are especially good as red snapper seems drawn to these.

Where to Find Red Snapper

One of the first things you need to learn about red snapper fishing is that the older the snapper is the deeper into the water they will go. It’s the younger ones that swim in the muddy or sandy bottoms as well as the shallow waters, while the adult ones can be found in depths of 100 to 500 ft. and also around ledges, drop offs and coral reefs.

For those heavy sinkers you will need lines and tackles in the 50 to 100 lb. class. You also need a rod with a strong butt and backbone, as well as a sensitive tip. You might also want to consider adding an alarm bell at the rod’s tip which should serve as an indicator if a snapper has taken a bite. There are plenty of lines available, but whenever possible, go with braided as it’s resistant to water, has minimal stretch and sensitive.

How to Increase Your Catch

If you want to catch as many as possible, fish in an anchored charter and reel the snapper in quickly, otherwise it’s going to go down to the bottom again. One way to keep them around is to use attractive bait. As was pointed out earlier, squid, dead cigar minnows, cut fish and pilchards are good options particularly if the spot isn’t frequently fished at.

If the area is heavily fished, use smaller live bait so you can catch some of the medium sized ones. If you want to land some of the 20 or 30 pounders, use dead bait as well as pogies and squid. But if you’re serious about getting the big one, a live bait is necessary. This doesn’t mean big snappers won’t bite into dead bait –they will- but they don’t do so consistently.

If live baits are hard to come by, large pieces of meat may be used, but the cuts have to be large enough so the smaller red snapper won’t be able to snap it up. You can use different types of meat, but tuna and amberjack belly meat are good choices. Apart from the large baits you should also pay attention to the lead weights. Contrary to popular belief you don’t have to use the biggest ones available. In fact it’s a good idea to use the lightest possible weight so you can get your bait down.

Most of the red snapper are in the upper part of the reef so you don’t want to throw the bait past them. What you want to do is use just the right amount of weight so that your bait goes down the current. There’s no hard and fast rule for this, but 1, 2 or 3 ounce weights is going to be enough to get your bait into the feeding zone where the big fish are.

Under these circumstances the best option will be a knocker rig, wherein the weight slides to the hook instead of being fastened on the main line over the swivel. You can also use a no weight rig to produce a drift line behind your boat. Now you just need to cast pitch baits and let them drift. If it’s red snapper season you’re bound to catch more than a few using this method. Once the bait is thrown, place your rod in the holder with just a light drag and watch over it.