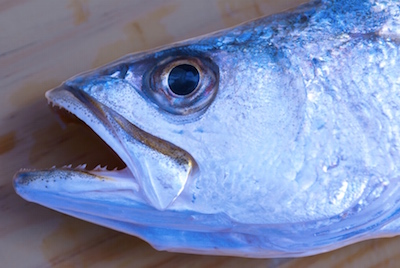 If you want to know how to catch sea trout, your lessons should start with the bait. Do keep in mind that this can vary depending on where you fish, but the following are the most common and should help you get started.

Live shrimp should be your first option. You can use it on a jig head, free lined, slip float or a popping float, it doesn’t matter because shrimp is more effective compared to other baits.

Popping floats are useful for drawing sea trout near your bait and can be effective in shallow water. Slip floats on the other hand, lets you fish using your float and bait in down to 20 feet of water. What the slip knot does is allow the float to slide on the line and stop at a specific knot.

When your float moves with the current, your bait, which is several feet underwater, moves along at the same pace at the depth specified. When you study how to catch spotted sea trout one of the things you will learn is that they suspend themselves at a particular depth, though it will depend on the conditions of the water. By using these floats you’ll be able to set the bait along with the trout.

Free lining simply means hooking up your live shrimp or whatever live bait you choose on the line without any float or weight. Once hooked up you let it drift with the current, and this technique works well in creeks and if there’s a deep bend. Your bait is going to drift along with the current into the creek’s bend, right where the trout are. This technique also works while drifting through grass flat or mud too.

If you want greater control and longer casts you should hook up a live shrimp onto a jig head. This is also a good option if you want the bait to be near the bottom of the water. The shrimp needs to be hooked vertically at the tail so the jig head can bring it backwards through the water while upright. A jig head also lets you move your bait in a jogging manner, and this up and down motion mimics the movement of shrimp, which attracts trout.

You can also use live bait when sea trout fishing, though the baitfish will depend on your location. If you’re at South Florida the most popular baitfish is pinfish, and they’re usually caught in the grass flats over the Bay. Just like in most cases live shrimp is recommended, free lined or under a float. Pinfish is also effective bait in Texas as well as the Gulf of Mexico. If the pinfish is too large, just cut off filet from the side, trim and allow it to drift, free lined or under a float. You can use the same approach with medium sized pinfish.

You’re not limited to pinfish though, as you can also use pork fish or menhaden, and you use them the same way as pinfish. You can filet these baitfish too, just be certain the piece you remove is flexible and clean cut. The cut also has to look natural when it flutters and drifts either under a float or free lined.

Bait presentation is very important, and even if it’s dead bait you’ll still catch some trout. The one thing you need to avoid is an unnatural-looking bait, as anything that spins or is ragged isn’t going to draw their attention. If you want to use dead bait, use ballyhoo, pigfish, pinfish or mullet, and the side filet from a lady fish can be just as effective. Whichever you choose, cut it evenly so that the silvery part is visible, and it’s sure to draw the attention of trout.

What about Artificial Lures for Sea Trout

Sea trout lures are effective, in particular top water as they usually feed near the surface much more so than other fish. If there is trout feeding near the area, you just need to put out a noisy water lure and it’s going to catch their attention. There’s no shortage of colors available too, but a good combination is white and red or pink with and white.

You can also use jig heads with imitation shrimp, grubs or other plastic trailers. Again the choice of colors is up to you but pink and white has been known to produce good results. While live shrimp is ideal you can still catch a lot of trout with artificial lures, and they’re cheaper as well. If you don’t want to spend money on live shrimp, artificial lures will do just fine, and they’re reusable to boot.

Some anglers base their lure choices on its resemblance to real baitfish, and there are indeed plenty of lures that simulate the appearance and movement of baitfish. But even unusual looking lures can be effective. Whichever lure you choose, always pick a location where trout feed because that will increase your chances of landing one.

You can also use spoons for trout, and silver is especially effective for speckled trout. More than the colors, it’s the vibrating action and flash that attracts the fish. The general rule with artificial lures is the cooler the water is, the slower the retrieval will be.

Baitfish swim slowly when the water’s cold so your lure needs to imitate that. In warm water you can try different speeds, and the action and depth needs to vary as well. You can run them at varying depths along cuts, drop them into holes and so on. Mix up your approach and you’ll do fine.

Fishing for sea trout isn’t as difficult as compared to other fish, and if they’re in the vicinity you’ll land a few without exerting too much effort. Since you can use a lot of different baitfish, you can pick and choose, find the area where they’re feeding, and just sit back and wait for the bite.