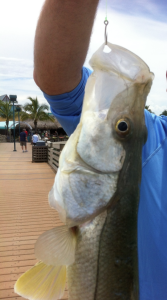 The coastal waters of South Florida are bountiful with a plethora of game fish. Offshore, you will find many exciting sport fish including: amberjack, jack crevalle, king mackerel, black grouper, black sea bass, gag grouper, grey grouper, wahoo, white marlin and also sharks such as the bonnethead shark and bull shark. A fishing charter is always available to get you out to where the action is.

Inshore fishing is always a hit and there are many areas to target such as the beach, the passes and inlets, bays, harbors, inter coastal waterways, canals and rivers. While there are many inshore species available such as the redfish (red drum), sea trout, red snapper, and tarpon, it is the snook that most anglers in Florida are after.

The common snook is a warm water game fish that inhabits the coastal waters of South Florida. On the west coast, they are found in the waters south of Tampa, throughout Everglades national park to the Florida Keys. On east central Florida, they are south of Cape Canaveral with a large snook population being in the Sebastian inlet.

The snook can be easily identified by their black lateral line running from the gill to tail. The snook’s gill plates are razor sharp and they must be handled with care. They also have a sloping forehead with a protruding lower jaw which are additional features to help to identify the snook.

Snook are warm water fish and they prefer water temperatures in the range of 67 to 78 degrees Fahrenheit. Being cold blooded fish, they become sluggish in temperatures below 67 degrees and can actually die if they are exposed to sudden temperatures drops below 58 degrees.

The Florida 2010 cold kill affected a large part of the snook population and the FWC closed the snook season for several years in an attempt to protect the existing snook and to help rebuild their numbers.

They are a protected species and they have a specific snook season for the harvest of snook. According to the fishing regulations by the FWC, a harvested snook can not be less than 28″. On the Atlantic coast they can not be more than 32″ and on the Gulf coast not more than 33″. Harvested snook can only be kept during the snook season and the Florida angler must also possess a snook stamp in addition to their Florida saltwater fishing license.

To be clear, the recreational harvest of snook is only permitted during the snook season outlined by the FWC and the snook must meet the size limit and the Florida angler must have a snook stamp in addition to a Florida Saltwater fishing License. All other times when the snook season is closed, the snook are closed to harvest and it is strictly catch and release only. Please check the FWC for the latest snook fishing regulations at FWC.

A little known fact is that these fish can tolerate fresh water for extended periods of time, which is why you can find juvenile common snook in brackish water which may feed into fresh water rivers.

Another interesting fact is that male snook change from male to female. This change usually happens to mature snook after the springtime spawn.

Snook are well known to be ambush hunters. They often will position themselves behind a structure within fast moving tide water waiting for a bait fish to swim by. Live bait is normally your best bet when fishing for snook.

A live sardine, pilchard, or threadfin herring (greenback bait fish) will always get a snook’s attention. Live shrimp is also a great bait to target snook and it is easily purchased at your local bait store.

Snook fishing is an exciting sport and definitely not for the faint of heart. Hooking up with a large Florida snook, as it jumps above the surface in an attempt to throw the hook, is a moment that you will not forget. Please be advised that catching a snook is not an easy task. They are smart, elusive and can be hard to entice to bite at times. However, catching a trophy snook is a dream for many Florida anglers. It is a possibility with knowledge, persistence and a little luck.